Impress Your Lake House Guests With This Hot New Pastry, "The Cronut."

I'm far more at home at the lake than prowling the streets of New York City in search of the latest food trend.  First there was the Krispy Kreme craze, then the cupcake fervor, now something called a "Cronut" has diverted the attention of the residents of Gotham City.  Available only at Soho's Dominique Ansel Bakery. These croissant-doughnut hybrids debuted just over a month ago, are apparently all the craze and are being scalped for as much as $40.00 each! 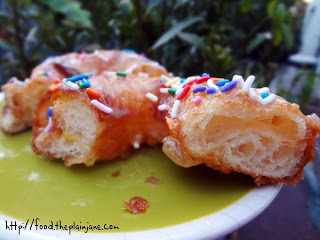 Having no plans for a trip to NYC, and little interest in standing in line for a gentrified doughnut, I did a little Goggling to find recipes for homemade "tribute pastries."  I found several, but like the one takes a shortcut by using frozen croissant dough from Trader Joe's.  After all, who wants to spend their morning at the lake making pastry dough.  For maximum effect, I suggest leaving a partially completed New York Times Crossword conspicuously placed and serving coffee from one of those press things you received as a gift, but have never used.

The recipe can be found Here.